Should I Give a Recorded Statement to an Insurance Company? 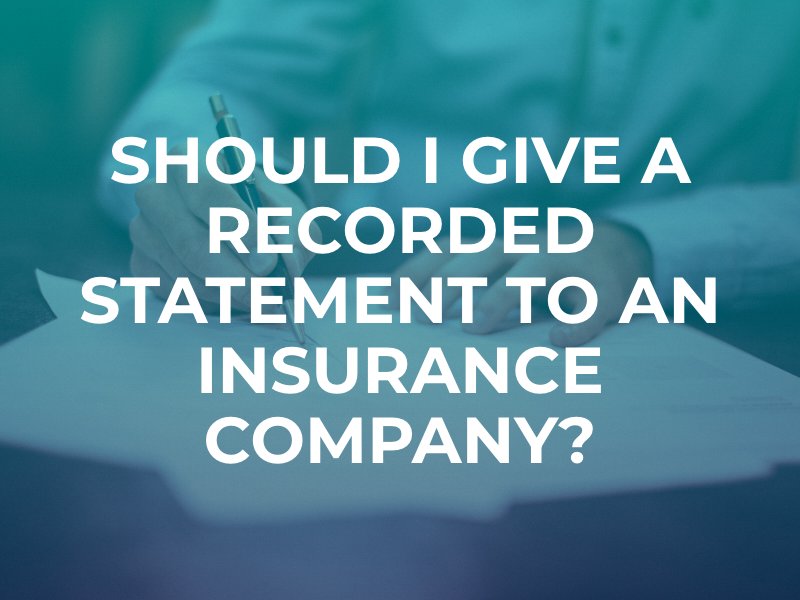 Why The Insurance Carriers Insist on a Recorded Statement

Did you know that most insurance carriers are for-profit entities? Why would this even matter when it comes to a recorded statement?

The reality is that insurance carriers are going to do everything in their power to limit how much money they pay out in a settlement. They will use various tactics to do so, and one of these tactics is to poke holes in a claimant’s statements. Insurance carriers will analyze statements from the scene of the incident and any statements given after the incident occurs.

When an insurance carrier asks for a recorded statement, they are essentially asking to be allowed to record everything you say so they can prove you have not been forthcoming or that you have lied somewhere along the way. With a recorded statement, the insurance carrier can point to any inconsistencies in your current statement and show how they do not line up with previous statements given.

The reality is that most individuals who make claims with insurance carriers are not doing so for nefarious purposes, but even a small slip of words could result in a problem when it comes to recovering compensation from an insurance carrier.

You are not required to give a recorded statement to insurance carriers under Georgia law. If an insurance claims adjuster calls you and asks you to give a recorded statement, you should politely decline to do so. The claims adjuster may be insistent, but your response should be, “No thank you, if you insist on recording our conversation, you will have to speak to my attorney with any further communication.”

The reality is that you should speak to a skilled personal injury lawyer after you sustain an injury in Georgia. These claims can get complicated, and insurance carriers are one of the main reasons for these complications. Your accident attorney in Atlanta can handle all communication with the insurance carriers, and they can work to negotiate a fair settlement on your behalf. Additionally, your attorney can act as a buffer between you and the insurance carrier, essentially taking out any opportunity for you to accidentally say something that could jeopardize your claim.

On a similar note, we strongly encourage you to cease posting on social media platforms until after your claim is resolved. Even posting something as innocent as a picture of you taking your children to a ball game or local parade could jeopardize your injury claim in Atlanta. Even if your posts are set to private, anyone you know could share the post accidentally and open it up to the public sphere.